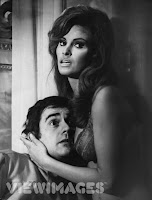 Blanche DuBois: “I was fishing for a compliment.”
Stanley Kowalski: “I don't go in for that stuff.”

But another masculine archetype has been on wide-screen display in Hollywood comedies. Here you find grown men reduced to stammering, groveling adolescence by mere proximity to female splendor. Take your pick: Tom Ewell with Marilyn Monroe in Seven Year Itch, Tony Randall with Jayne Mansfield in Will Success Spoil Rock Hunter?, Jack Lemmon with Monroe and Kim Novak and other bombshell beauties in any number of comedies.

Male inadequacy is front and center, of course, in the nerdy film personas of Jerry Lewis and Woodie Allen. A perfect example can be seen in a YouTube clip from Hollywood or Bust, which shows Jerry Lewis literally falling head over heels at sight of Anita Ekberg:

The geek-and-goddess romance becomes thematic with Dudley Moore, who was Bedazzled by Raquel Welch (see above) and bewitched by Bo Derek in 10. In the original Heartbreak Kid, buttoned-down honeymooner Charles Grodin up and dumps his Brooklynesque bride to pursue the Minnesota shiksa perfection of Cybill Shepherd.

But it’s not just nerds and geeks who willingly succumb to the power of female sexuality. Check out any strip club in a blue-collar neighborhood (where many tend to be), especially on a local payday, and you’ll see truck drivers, factory workers, mechanics and Hell’s Angel wannabes packed shoulder to shoulder in the stage-side seats, gaping up in idolatrous awe and hanging their hard-earned cash along the railing. These are offerings to the prancing priestesses on high, who do the strutting and swaggering, affording the acolytes below only sneak peeks into forbidden paradise.

Goddess worship could hardly be more explicit, nor the imbalance of power between male supplicant and dominant female more visible. Vive la différence!
Posted by Mark Remond at 1:26 PM 1 comment: