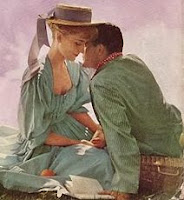 This is in response to a comment  on my post “Ideas for Matriarchal Weddings,”  in which I mentioned both the wearing and making of aprons by a bridegroom in a matriarchal wedding. Anonymous wondered if I was feminized by Nancy in any way, or if I had a desire to be feminized or to wear feminine things.

This question provides me a convenient entree into a topic I wanted to introduce—men getting actively involved in feminist activities.

Yes, I wear an apron while doing household chores; it's the first thing I put on when I arrive home. Nancy is from a female-led family and men wearing aprons was— is!—a family tradition. I'm now following that tradition. Even if Nancy decided against it, I'm sure that my mother-in-law would insist as she now lives with us and represents an authority figure within our home. As for my style of aprons, I have many, some plain and masculine, and others quite fancy and decidedly feminine.

As for being feminized, neither Nancy onr her Mother feminize me, at least in the popular connotation of the term. Being feminized seems to have a forbidden connotation to it— and it shouldn't. Women have crossed the gender divide in their dress and interests for years and have not been criticized for doing so. Men going the other way have not fared as well.

Feminist writers have made the critical observation that, in emulating men in dress and interests, women are paying tribute, of sorts, to the so-called “superior” sex. On the other hand, men who have taken women's clothes and interests are ostracized because they are emulating the “weaker” gender.  Both these behaviors are not only sexists but patently patriarchal.

Now consider that women are getting the majority of college degrees, have a lower unemployment rate, are increasingly represented in the professions and are gaining at the executive level. What now on feminization?  If we migrate toward a matriarchy—and we are!—with women gaining recognition as the superior sex, are more and more men going to emulate women in their dress, interests and manner? It's an intriguing question.

Now let’s look at feminization in another context—being a man in a female-led relationship and secure enough in himself to cross the gender line to enjoy activities, hobbies, mannerisms, etc., traditionally associated with women. 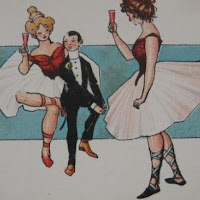 In my case, following the example of women in our family, I, too, send out cards and handwritten notes on fancy stationery to mark special occasions, birthdays, etc.  I enjoy accompanying my wife, her mother and friends to the ballet and enjoy being attentive to them when we are out. I enjoy various crafts as well as a good romance novel.

I don't consider myself feminized but rather as objectively reaching across gender lines to embrace things that I see as having value. I think I've done the same with my embracing a female-led relationship, hardly something a patriarchate would call “masculine.” One feminist philosopher wrote that woman do not  need to give up their options for dress, makeup, etc., as a precondition to achieving equality (feminists talk about “equality” but increasingly mean “superiority”!). Rather, these feminists say, Women should retain the options they have and offer them to men. Maybe as matriarchy dawns, men will be wise enough to embrace the options women are offering and be able to do so without criticism or ostracism.
Posted by Nancy and Dennis at 6:20 AM 7 comments: 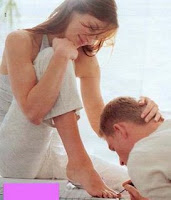 An ideal Matriarchal wedding? Well, there are many possible components but ultimately it gets down to what the Woman wants. Here are a few suggestions from our experience. 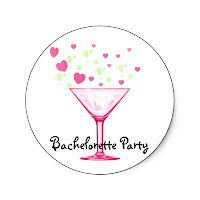 A key element would be marriage vows that are structured to reflect the couple’s female-led lifestyle. He would certainly take a vow of obedience to his new bride, and she might promise the traditional have, hold, love, and cherish. This is something to be planned in advance, and it serves a useful purpose of formalizing his commitment and letting all in the congregation know of the couple's intentions. I took a vow to love, honor, worship, and obey Nancy when we married. She and her family structured our vows, and until I got to the altar I was unaware of exactly what my vows would be, although we had discussed obedience. Waiting until the ceremony was a way of indicating my trust in Nancy and demonstrating that i believed she would always act in my best interests. 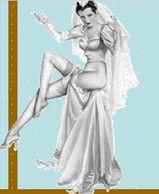 Have the minister present the married couple with her name first, using whatever name or names the couple will use. In our case Nancy retained her name so, something like "I now present to you our newlyweds, Ms. Jane Doe and Mr. Frank Smith" would be done in such a case.

Another thing we recommend, which also comes from our wedding, is the giving of aprons to the groom. I received six different aprons, all beautifully decorated and all decidedly feminine. Each bridesmaid bought or made one of the aprons. This was quite appropriate to a man who was to have a decidedly domestic focus after marriage. I opened these gifts and tried all of them on during our reception and then danced with the bridesmaid who presented it. An apron is a gift that speaks volumes about the couple’s anticipated life after marriage and in giving me an apron each bridesmaid recognized my role. Incidentally, Nancy's bridesmaids were all feminists like Nancy and me; these women rarely wore an apron for any reason, although I’m sure their men did! 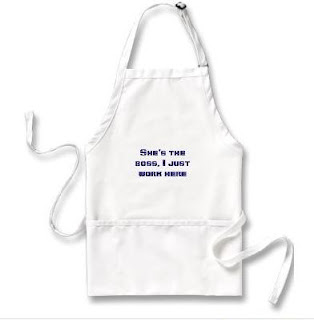 As a show of Matriarchal power have the bride order her new husband—wearing an apron, of course—to serve cake to the assembled guests. After a cutting the cake and having a toast, Nancy told me to serve cake to the guests. This was Her first instruction given to me as a married man. The women loved it, and I did, too.

In the weeks leading up to the wedding have the prospective groom make an apron. Nancy's grandmother said that an apron would be a useful item for a married man and suggested I make one. Under her tutelage I did, a very fancy, full apron that took a long time to cut and sew. It was unveiled at our rehearsal dinner the evening before our marriage. Lots of fun and very useful. Wearing my apron, I served champagne to the female members of the wedding party at our rehearsal dinner. I still have that apron and the other wedding aprons, although, in the interest of preserving them, I don't use them as frequently as I did earlier in our marriage.

If he is taking her name in marriage, something that, unfortunately, can still be controversial, a couple will want to make sure everyone present is aware of the couple’s intentions. I've mentioned this in an earlier post.

Before the wedding a couple should discuss and formalize issues such as whose career takes precedence, how much housework he will do, mention that she will manage finances, and so on.

Nancy and i have identical wedding and engagement rings. We also wore identical stud earrings. This was our preference, and other couples have done similar things.