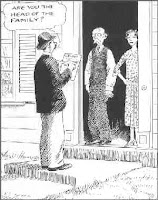 My father would have loved my wonderful wife, whom he never lived to see (along with his grandchildren, alas). And he would have been greatly relieved to see his younger son so well married and happy. Relieved and perhaps envious, for his troubled marriage to my mother ended in separation and bitter recrimination.

But I can’t help thinking, also, at how dismayed he would be, were he still around, if he could somehow witness the secret dynamics of my marriage. The idea of a Wife-Led Marriage would have been inconceivable to a man of his generation, which accepted all the assumptions of male chauvinism as divinely ordained. That a man would have not only accepted secondary status in a marriage, but actually fostered and campaigned for that status, would be beyond his imagining.

“Henpecked and pussywhipped” might be two of the more acceptable labels he could apply to my conjugal status. Imagine a husband turning over complete financial control to his wife, indeed, abdicating the entire decision-making process in her favor! And surrendering control in the bedroom, as well! So that she decides all, and her voice is final in all matters. How could a self-respecting man let himself be reduced to such a wimpish, childlike state?

If he could see me, kneeling each night at the foot of our bed, blissfully rubbing lotion into her feet as she reads or watches TV, then kissing her feet as a concluding gesture of devotion, he would appalled. Or what if he saw me giving her a pedicure, the painstaking care with which it is necessary to apply especially that first coat of color! What a lackey his son had been reduced to!

But then, again, might he not experience a pang of jealousy? For he might also see the complete absence of dispute between his son and his beautiful daughter-in-law, as I acquiesce to her wishes, and even hints, in all matters. Would he not see that ours is a blissful union compared to his own?

Had he yielded to my mother, or even been susceptible to her advice, we would have held onto a particular house that went on to appreciate by many hundreds of thousands of dollars over the years that it no longer belonged to us. We would not have dissipated our family savings. My mother was frugal, my father improvident. Would we not have prospered vastly with her in control of finances? Of course we would.

And had he deferred to her, been ruled by her in all matters of disputes, our family would have stayed together.

But there are consolations, as I think back on these matters. Both my brother and I have had long and happy marriages. I don’t know all the dynamics of his, so I wouldn’t venture to say that his is wife-led, but I suspect that, in many areas, his wife has the deciding vote.

As well she should. Evidently my brother and I both learned a great lesson from our parents’ unhappy marriage. In my case, I will say without reservation that being henpecked and pussywhipped is a good thing for a husband to be.
Posted by Mark Remond at 12:48 PM